Andy's back with 15 tracks of uplifting, rocking, soulful blues.
Released 1 February 2022, just click on the picture for a list of streaming sites where you can hear and download the album.

It is available to purchase from Amazon Music

Or stream on Spotify

Andy returns to his Blues roots with "Stand, Abide, Endure". However, as this is an Andy Lindquist album there is an adventure to be found in these grooves. Andy simply doesn't know how to do "predictable".

So here, we have the gentle, romantic "Just Like a Circle" rubbing shoulders with the brooding tale of retribution "Blues on The Red".

The foot stomping acoustic grooves of "That Funky Soul Mud" and the compelling riffs and slide of "The River Queen" with Andy paying tribute to his Blues heroes and influences.

The fifteen tracks also encompass country, funk, soul, ska as well as a diverse exploration of the Blues from old style picking to hard rocking anthems.

Andy's guitar drives the album and notably on this occasion his slide playing is to the fore. However, as always with Andy's work, it's the strength of the song writing, the dexterity of the vocal harmonies and the sheer joy of making music that shines through.

Words so often used to describe musicians, but Andy Lindquist takes all three to new levels.

Prolific - over 40 studio albums, most of which have been recorded in the last 20 years.

Versatile - a multi-instrumentalist whose albums have included forays into Power Pop, Funk, Soul, Jazz Fusion and a whole lot of Rock and Blues.

Driven - Andy has battled back from three strokes, having to teach himself to play again each time. He creates music to help counter the pain of Behcet's Disease. "I float along with music, and it helps me to cope with this endless pain cycle"

Andy's range of material is truly staggering. In the last few years alone his albums vary from blues, country, pop/rock, funk, soul and beyond. Equally at home playing instrumental tributes to his much loved Scottish towns. cities and landscapes, lyrically tackling the relevant issues in politics and religion on concept albums or just espousing having a dance, a party and a real good time. Andy's musical and vocal talents make him a master of any genre.  Andy has also written music for commercials and movie scores.

Andy has embraced modern technology and seized the positive, liberating force of the Internet.

"I think its quite like the Old West on the internet for independent musicians. I feel like I can really be myself and do my thing there. I have never done it for the money, I do it because I love it just like that 13 year old Andy liked it so many years ago!"

As a child his love for Louis Armstrong and Herb Alpert inspired him to play the trumpet from the age of nine. A few years later he bought his first guitar. Not content with just playing the instruments he studied the craft of building them too at Red Wing Luthier College. At the age of 44 he decided to teach himself piano and has avowed to learn a new instrument every year. I wonder if he has got around to the bagpipes yet?

“The master of Dakota blues.” 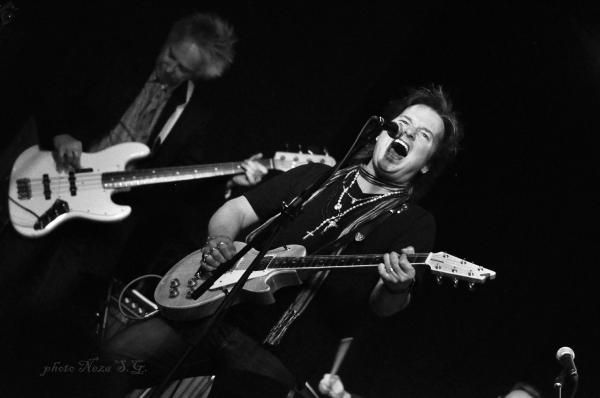